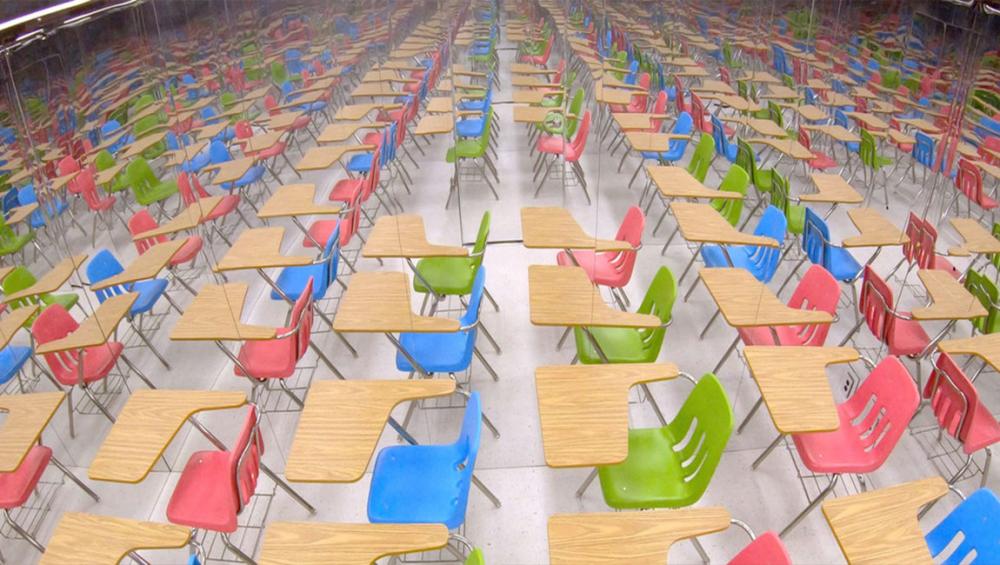 New York: A non-profit dedicated to exposing the severity of the global education crisis has been inviting delegates to the UN General Assembly inside a tiny mirrored installation this week, to drive home the reality that around 260 million children are missing from classrooms around the world.

Beginning 22 September through the end of next week, the Infinity Classroom exhibition by non-profit, Theirworld, will sit in the UN Plaza, open to visitors. The mirrored room is filled with what appear to be an infinite number of empty school desks - representing the millions of children out of school every day.

The station is the centerpiece of Theirworld’s #WriteTheWrong campaign, geared at building awareness of the global crisis and mobilizing the political will and financial support that is needed to give every child a chance to achieve their potential.

Founder and Chair of the NGO, Sarah Brown, said on Thursday: “The world has the largest number of refugees and displaced people since the Second World War, half of whom are children”, speaking to UN News, on a panel for the UN’s annual discussion series, dubbed the SDG Media Zone.

“We owe them what we want for our kids - a safe place to learn. That’s why we’re calling on all countries and international institutions to make education a priority”, Brown said.

More than a thousand visitors have passed through the Infinity Classroom, during the UN’s high-level week, according to the NGO, including heads of government, senior officials, activists and celebrities. Meanwhile, the #WritetheWrong campaign has seen major funding breakthroughs.

On Wednesday donors and foundations announced more than $200 million for the global fund, Education Cannot Wait, to make school possible for millions of children caught up in conflicts, disasters and displacement crises.

In addition, guarantees of $500 million and grants of $100 million for the International Finance Facility for Education (IFFEd), another education funding resource, will allow an additional $2 billion to be mobilised to get children into school in?the "missing middle" - countries which lie between the developing world and rich nations.

"This is the largest amount unlocked for education in a single day because IFFEd multiplies donor resources and unleashes new funding streams", said Theirworld President Justin van Fleet.?He sounded an optimistic note that “it is entirely within our reach to end the global education crisis.”

“If nothing changes, by 2030, more than half of the world’s 1.6 billion children won’t have basic skills to get an entry-level job or participate in society”, van Fleet added. “We are at a crossroads and we must act. It is within our reach to end the global education crisis."

TheirWorld
The Infinity Classroom installation at the main Plaza at UN Headquarters aims to give visibility to the global education crisis. (26 September 2019)