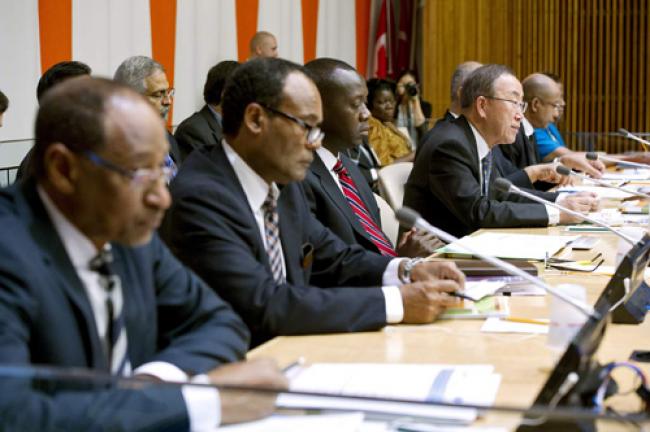 New York, Oct 22 (JEN): Hailing the success of the self-assessment mechanism agreed among African leaders a decade ago, United Nations Secretary-General Ban Ki-moon Monday said the peer review process has not only fostered more principled leadership and constructive national dialogue but has opened up more space for citizens to participate in the decisions affecting them.
“The APRM [African Peer Review Mechanism] has deepened a democratic political culture among African Governments,” said Ban, opening a High-Level panel co-organized by the UN Office of the Special Adviser on Africa, and the African Union on Africa’s innovation in governance over the 10 years of the review’s implementation.
The discussion kicks off a host of activities at UN Headquarters marking “Africa Week,” which spotlights progress in implementing the African-led growth and development initiative known as the New Partnership for Africa’s Development (NEPAD), and which this year coincides with the 10th anniversary of the APRM, and the 50th anniversary of the founding of the Organization of African Unity, now the African Union (AU).
Noting that the Peer Review began life a decade ago as a “bold initiative” that showed the world that African leaders were ready to take action on difficult and sensitive problems of governance and democracy, the UN Chief said: “Ten years on, this approach has proven its value.”
He paid tribute to the 17 countries that have completed self-assessments under the APRM – a mutually-agreed instrument encouraging action among African countries in political, economic and corporate governance standards, and agreed objectives in socio-economic development – and noted that the process has identified a number of areas where African countries need to improve.
“It showed the need to better manage natural resources, stop corruption, end xenophobia, address youth unemployment and take action against organized crime and terrorism,” said Ban, adding: “Above all, the APRM points to the critical need to halt unconstitutional changes in Government – and, when they happen, to respond robustly in defence of principle.”
The UN chief said the time is now to deepen and broaden the valuable peer review process so that more countries can benefit. “The goal, of course, is for all countries in Africa to face this scrutiny, by themselves and by others. This is what African people expect of their leaders,” he declared.
“What the APRM does for governance, NEPAD does for development. Together, they help Africa to advance along the path of democracy and development to benefit the continent’s people,” the Secretary-General said, underscoring the Organization’s commitment to the aims of the vital initiatives.
Turning to the broader situation on the continent, he said: “Africa’s prospects are strong,” noting, among other positive aspects, that several countries are among the world’s fastest growing economies; fewer Africans suffer from extreme poverty; and more African women are finding work beyond the fields – including in parliaments and statehouses.
Yet, while prospects were improving in the Sahel and Mali, where the AU and the Economic Community Of West African States (ECOWAS) are helping the UN mission consolidate gains following the elections, Ban said he remained “deeply concerned” about the situation in the Central African Republic.
“It is essential to restore law and order throughout the country, protect civilians and ensure a return to constitutional order,” he said, stressing that: “International solidarity remains essential to addressing all of Africa’s challenges.”
In an interview with UN Radio, Ambassador Tete Antonio, the representative of the African Union to the United Nations, said that NEPAD and itsPeer Review Mechanism furthered the overall effort to promote pan-Africanism and to strengthen partnerships that addressed the priorities identified by Africans themselves.
“While celebrating this…anniversary, we would also like to send our message to the world, here at the United Nations, which is the centre of international diplomacy,” he said, emphasizing that “Africa is changing” and he hoped gains made in all areas of NEPAD implementation, as well as other ongoing governance and structural changes, will help change the attitudes of the continent’s development partners as well.
Secretary-General Ban Ki-moon (right) addresses the high-level panel discussion, “Africa’s innovation in governance through 10 years of the African Peer Review Mechanism (APRM).” UN Photo/Eskinder Debebe