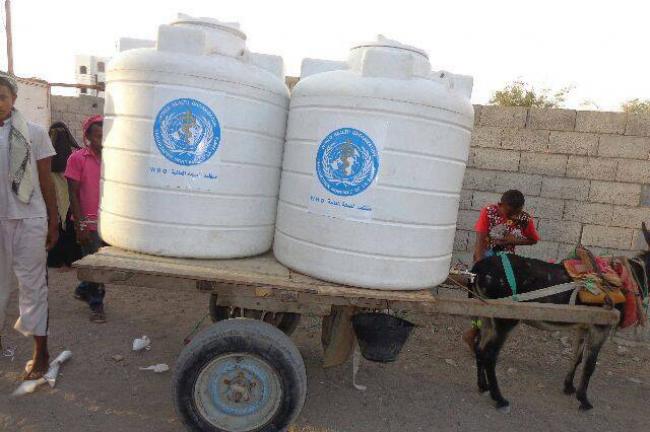 New York, May 15 (JEN): Secretary-General Ban Ki-moon has spotlighted the importance of Yemen's humanitarian ceasefire as the United Nations and its partners ramp up critical relief efforts to civilian populations in need, according to a spokesperson for the Organization.

Addressing a press briefing, UN spokesperson Stéphane Dujarric told reporters that the Secretary-General had spoken to Khaled Mahfoudh Abdullah Bahah, the Vice President and Prime Minister of Yemen, by phone earlier in the day and reportedly emphasized the need to fully operationalise the humanitarian pause in effect throughout the country.

Dujarric further explained that Ban had noted is mobilization of the whole UN humanitarian system to support the Yemeni people.

Moreover, the spokesperson said the Secretary-General restated that that there is no military solution to Yemen's ongoing conflict and that, to that end, he would soon convene a meeting of Yemeni parties in a third country, in accordance with Security Council resolution 2216.

Against that backdrop, in a separate statement marking the end of his visit to the Gulf nation, the UN's Special Envoy on Yemen, Ismail Ould Cheikh Ahmed, today welcomed the recently established five-day humanitarian truce in the country but noted with concern reports of “sporadic violations” in some areas.

He urged all parties to fully adhere to the agreed cessation of hostilities from the remainder of the ceasefire in order to facilitate the delivery of “urgently needed life-saving assistance.”

“Yemenis throughout the country have faced tragic levels of suffering and violence over recent months,” Ould Cheikh Ahmed declared.
He added, “The humanitarian pause is important to give them time to seek medical assistance and receive much-needed humanitarian assistance which so far has been unable to reach most Yemenis.”

The Special Envoy also called on all sides to refrain from any actions that would undermine the safety and security of Yemen's transportation infrastructure, including seaports and airports – both critical to facilitating the delivery of humanitarian aid.
In addition, he encouraged “the lifting of the current blockade to enable the import of fuel, food and medicines.”

Following his visit to Yemen, Ould Cheikh Ahmed will now continue his consultations in the region as part of his efforts to ensure that the international community remain focused on helping Yemen build a peaceful future.

Since the Yemen conflict erupted in mid-March 2015, over 1,400 people have been killed and close to 6,000 people injured, roughly half of whom have been civilians.
Civilians across the border in Saudi Arabia's frontier towns have been caught up in the fighting as well.

Meanwhile, Yemen was already in a precarious state prior to the explosion of violence with the current fighting only fuelling concerns in the humanitarian community that the country would grow increasingly food insecure.

A 2014 World Food Programme (WFP) food security survey found that 10.6 million people – 41 percent of the population – were food insecure with more than five million people severely food insecure – in need of food assistance.
The current conflict will exacerbate the precarious food security situation because the country imports more than 90 percent of its food needs.

In the latest situation report from the ground, the UN's Office for the Coordination of Humanitarian Affairs (OCHA) confirmed that relief efforts during the first 24 hours of the humanitarian pause were primarily directed towards re-supplying and pre-positioning stocks while mobile medical teams travelled to affected areas in Amran, Hajjah and Hudaydah.

At the same time, telecommunications networks continue to face “serious problems” as an estimated 70 per cent of phone calls fail to go through, especially in Aden and Sa'ada, where communications are “nearly impossible.”