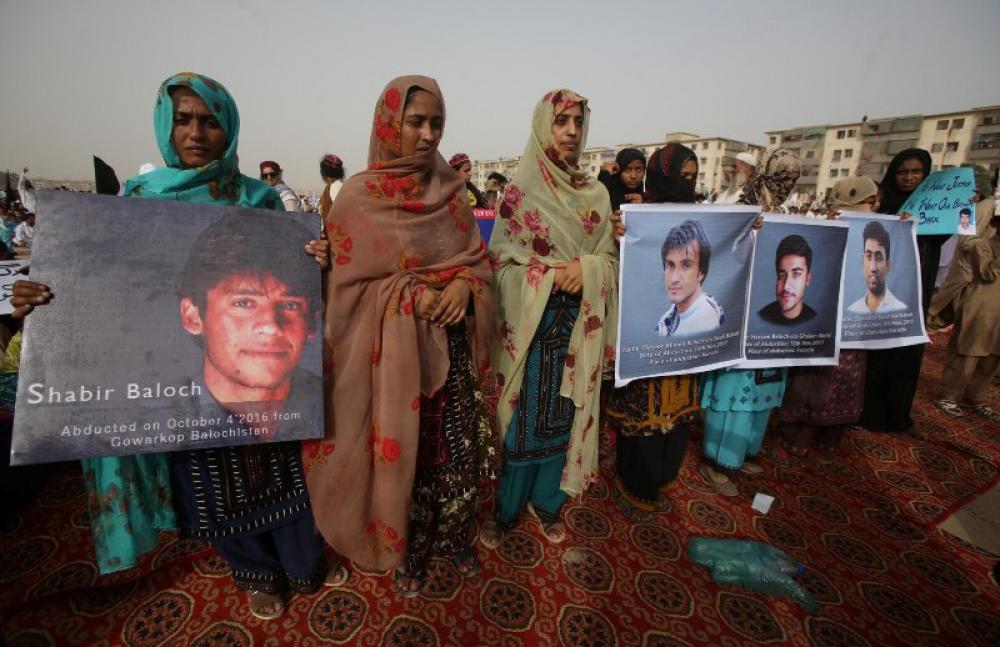 File image by Voice of America (VOA) via Wikimedia Commons

Islamabad: Political activists, journalists, free-thinkers, social media influencers, mainly people with voice and conscience have suffered since long in the hands of Pakistani establishment for addressing various lacuna of state and protesting against misrule and tyranny, especially the cruel practice of enforced disappearances.

One of the most infamous cases is the murder of SabeenMehmud. She was a prominent Pakistani social and human rights activist, shot dead in Karachi, shortly after hosting an event on Balochistan’s “disappeared people.”

Mahmud, was the director of T2F [The Second Floor], a cafe and arts space that has been a mainstay of Karachi’s activists since it opened its doors in 2007. She was one of the country’s most outspoken human rights advocates.

Recently, an activist, Inam Abbasi, leader of Sindh Sabha, who had been holding a sit-in outside the Karachi Press Club against enforced disappearances has been arrested over terrorism charges, according to his family, friends and the police.

A police spokesperson said in a statement on June 24 that Abbasi had been arrested under sections 131 (abetting mutiny, or attempting to seduce a soldier, sailor or airman from his duty) and 153 (wantonly giving provocation with intent to cause riot) of the Pakistan Penal Code, and Section 7 of the Anti-Terrorism Act (ATA) of 1997.

The state of Pakistan not only abducts common people voicing injustice and violence, but also those who are fighting for the rights of such disappeared people. The phenomenon is all pervasive in the country.

For instance, in October, 2018 GulaliIsmail, a Pashtun and women's rights activist, conferred the prestigious Reach all Women in War (RAW in WAR) Anna Politkovskaya Award, was detained in Islamabad airport.

In January, 2020, Hazara lawyer and human rights activist Jalila Haider hailing from Balochistan, was detained by the Federal Investigation Agency (FIA) for seven hours at the Lahore airport. She is very vocal about the persecution of the Hazaras in the country.

In 2018, she went on a hunger strike, demanding the state to address the violence against the people of the Hazara community, who she said faced persecution due to ethnicity and sectarianism.

Sadly, according to US Department of State’s, 2021 Country Reports on Human Rights Practices: Pakistan

“…Kidnappings and forced disappearances of persons took place across the country…The governmental Missing Persons Commission reported that it had opened 8,100 missing-person cases during the year and had solved 5,853 of these cases as of July."

"Human rights organizations reported some authorities disappeared or arrested Pashtun, Sindhi, and Baloch human rights activists, as well as Sindhi and Baloch nationalists without cause or warrant. Some children were also detained to pressure their parents."

"Activists claimed 500 Sindhis were missing, with more than 50 disappearing in 2021 alone. On August 26, the Sindh High Court ordered law enforcement agencies to recover all missing persons in Sindh by September 11. A lawyer representing the Sindh Rangers informed the court that of 1,200 missing persons, 900 had already been recovered in the province. Of these, Sindh police located 298 in the last six months…”

There is no doubt that the legality of procedure related with enforced disappearances in Pakistan is completely in shambles.

The long-awaited bill aimed at criminalizing enforced disappearances as a separate offence is still not passed, in spite of the lofty claims made by former government of Imran Khan.

Brazenly, in January, it was declared that the bill went ‘missing’.

The bill, Criminal Law (Amendment) Bill 2021, was passed by Pakistan’s National Assembly on November 8, 2021, and is aimed at making amendments to the Pakistan Penal Code (PPC) and Code of Criminal Procedure. It was introduced in the National Assembly by the interior minister in June 2021.

While initially there was no provision related to the filing of a false complaint or false information about subjecting a person to enforced disappearance, afterward a provision was added to the bill to declare it a penal offence punishable by up to five years imprisonment with a fine up to PKR 500,000.

The proposed law provides for the addition of a new section 52B in the PPC for defining an “enforced disappearance.”

Moreover, in another act of political eyewash, in May, 2022, the Islamabad High Court has directed the federal government to issue notices to former military ruler General Pervez Musharraf and all his successive chief executives of the country including incumbent Prime Minister Shehbaz Sharif as to why proceedings should not be initiated against them for subversion of the Constitution in context of the state policy on enforced disappearance.

Most importantly, the court also said that perception of the involvement of law enforcement agencies, particularly the armed forces, in this severe crime against humanity was the most profound violation of public interest and policy.

Following this move, on May 30, 2022, the federal government constituted a seven-member committee for the "deliberation of a policy" related to enforced disappearances in the country after the Islamabad High Court instructed the heads of the government to explain how disappearances "became state policy".

Enforced disappearances were part of the mainstream discussion during the Musharraf period. They began shortly after 9/11, and if the debate around them was hesitant then, it became more black and white when the ‘affliction’ spread to Balochistan.

Those who had been willing to overlook the ‘kidnappings’ of those supposedly related with right-wing organisations, did not find it easy to ignore Balochistan.

Incidentally, former Senator Farhatullah Babar is also of the opinion that enforced disappearances and extrajudicial killings have been there since decades but they were institutionalised during the regime of General Pervez Musharraf who acknowledged in his book, In the Line of Fire: A Memoir, the people of Pakistan were hunted for the CIA against millions of dollars but no action was taken against Musharraf as the state agencies were involved in it.

Babar also said 153 army personnel had been identified and it was said that action was being taken against them but nothing practical was done.

In addition, in 2006 when the Talibanisation started, the people of tribal areas were deprived of their legal rights.

The extrajudicial killing and enforced disappearances started in the areas in the year 2008 when the army operation was launched and there was no legislation on it.

In 2011, the parliament gave legal protection to the operation, perhaps under the direction of the armed forces.

The state sanctioned and also sponsored act of cruelty on its own citizens is beyond our comprehension. The unstable nature of democracy in Pakistan, along with extremely strong grip of theocracy and military create apt situation for prevalence of such brazen acts of terror.