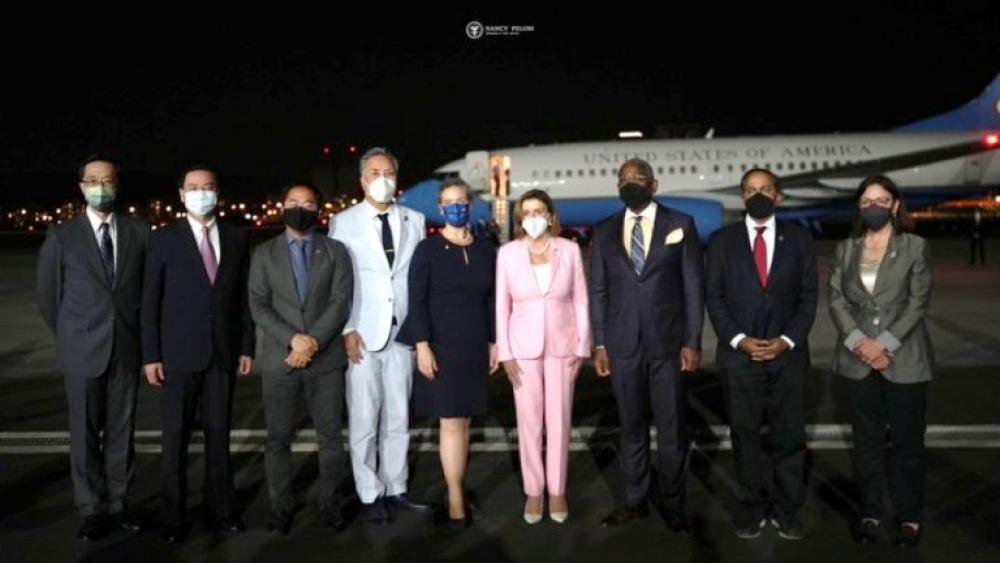 Taipei/JEN: A total of 21 Chinese military planes flew into Taiwan's air defence zone on Tuesday as US House Speaker Nancy Pelosi arrived at the self-ruled island that Beijing considers its territory, officials in Taipei said.

The ADIZ is not the same as Taiwan's territorial airspace but includes a far greater area that overlaps with part of China's own air defence identification zone.

Nancy Pelosi landed in Taiwan on Tuesday amid a face-off with China over her visit.

The flight carrying her landed at Taipei airport as China closed the Taiwan strait and east coast airspace around the Xiamen area.

After landing, Nancy Pelosi tweeted: "Our delegation's visit to Taiwan honors America's unwavering commitment to supporting Taiwan's vibrant Democracy... Our visit is one of several Congressional delegations to Taiwan -- and it in no way contradicts longstanding United States policy, guided by the Taiwan Relations Act of 1979, U.S.-China Joint Communiques and the Six Assurances."

Our discussions with Taiwan leadership reaffirm our support for our partner & promote our shared interests, including advancing a free & open Indo-Pacific region.

She later wrote: "Our visit reiterates that America stands with Taiwan: a robust, vibrant democracy and our important partner in the Indo-Pacific."

Our visit reiterates that America stands with Taiwan: a robust, vibrant democracy and our important partner in the Indo-Pacific. pic.twitter.com/2sSRJXN6ST

The Chinese government has repeatedly warned against the trip and promised firm action in response to any trip to Taiwan by the senior US government official.

Beijing, which regards Taiwan as part of its territory, has earlier promised "grave consequences" over her visit.

The White House too warned that China may undertake military provocations in response to Nancy Pelosi's mooted visit to Taiwan, BBC reported on Tuesday.

This could include firing missiles near Taiwan, or large-scale air or naval activities, spokesman John Kirby had said.

Taiwan is a self-ruled island but claimed by China, which sees it as a breakaway province. Beijing had warned of "serious consequences" if Pelosi visits.

While the US maintains what it calls a "robust, unofficial relationship" with Taiwan, it has formal diplomatic relations with China and not Taiwan.