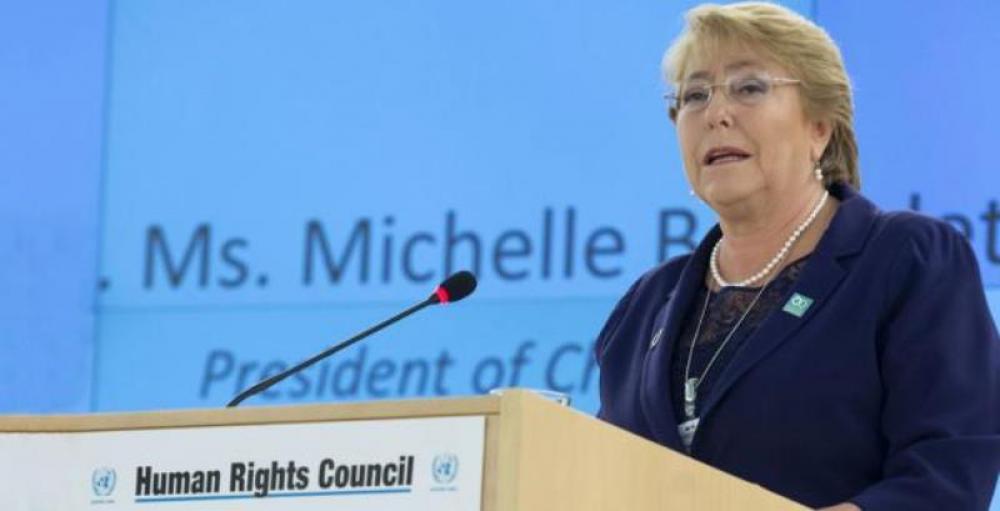 Geneva: The upcoming visit to China by the United Nations high commissioner for human rights should highlight the need for justice for victims of violations and accountability for those responsible, Human Rights Watch (HRW) said on Saturday.

High Commissioner Michelle Bachelet is scheduled to visit China during the last 10 days of May 2022, the first visit to China by a UN human rights commissioner since 2005.

While the high commissioner has previously asserted that she would require “unfettered” access to Xinjiang, the Uyghur region, to conduct an “independent assessment,” the terms of her visit have not been disclosed, and Chinese authorities have insisted they will not allow anything other than a “friendly visit” for the purposes of dialogue.

“The Chinese government is committing human rights violations on a scope and scale unimaginable since the last time a high commissioner visited in 2005, partly because there is no fear of accountability,” said Sophie Richardson, China director at Human Rights Watch.

“The high commissioner needs to work to end, not enable, that perception,” Richardson said.

The campaign has escalated to entail widespread and systematic policies of mass detention, torture, cultural persecution, and other offenses against the Uyghur and other Turkic populations in Xinjiang that amount to crimes against humanity.

Hundreds of victims of the ”Strike Hard” campaign have shared accounts about their experiences, and government documents leaked in 2019 reveal the intent to carry out violations on a mass scale.

Across the country, the authorities silence and imprison human rights defenders or drive them into exile.

The authorities increasingly deploy high-tech surveillance tools to detect and deter any speech they deem critical of the government or Chinese Communist Party.

Her visit comes just ahead of the anniversary of the June 4, 1989 Tiananmen Massacre, in which the military opened fire and killed countless peaceful protesters and bystanders.

Following the killings, the government carried out a national crackdown and arrested thousands of people for “counter-revolution.”

The government has never accepted responsibility for the massacre or held any officials legally accountable for the killings.

The authorities continue to harass the Tiananmen Mothers, a group of family members of victims and survivors of the 1989 pro-democracy movement.

Beijing has also put an end to the commemoration of the Tiananmen Massacre in Hong Kong, the only one previously permitted, and arrested vigil organizers.

Since President Xi Jinping assumed power in 2013, Chinese delegations at the United Nations have tried to rewrite norms and manipulate existing procedures to minimize scrutiny of the Chinese government’s conduct and to weaken accountability mechanisms.

The government has sought to remove human rights mandates from UN peacekeeping operations and blocked action to advance accountability for rights violations, including in crises such as Syria, Yemen, Myanmar, Ethiopia, and Ukraine.

China systematically misuses its participation in UN committees to deny accreditation to organizations critical of the Chinese government’s rights abuses.

While about two dozen UN agencies have a presence in China, the Office of the High Commissioner for Human Rights is not among them.

Bachelet first publicly announced that her office sought an unfettered visit to Xinjiang in September 2018. Since that time, the Chinese authorities have stalled, evidently to defer, delay, or deny the UN meaningful access to the region.

In September 2021, Bachelet told the UN Human Rights Council that her office was “finalising its assessment of the available information on allegations of serious human rights violations in that region with a view to making it public.”

Eight months later, Bachelet’s office has not yet published its report.

No explanation has been provided for the delay, and it is unclear when or whether the report will be published. In March, she informed the Human Rights Council of her intention to visit China in May.

Dozens of organizations, including Human Rights Watch, have expressed grave concerns that the Chinese government will manipulate the visit as a public relations stunt, while pressuring Bachelet to further delay her report or to dilute its findings.

“It defies credibility that the Chinese government will allow the high commissioner to see anything they don’t want her to see, or allow human rights defenders, victims and their families to speak to her safely, unsupervised and without fear of reprisal,” Richardson said.

“Bachelet’s legacy as high commissioner will be measured by her willingness to hold a powerful state accountable for crimes against humanity committed on her watch,” Richardson added.