Geopolitics
Governance/Geopolitics
‘Time is growing short,’ UN warns as it boosts delivery of winter kits to displaced in Iraq 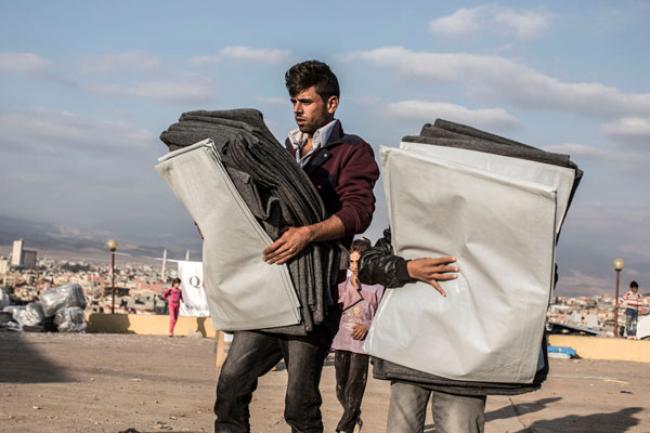 New York, Nov 22 (JEN) The United Nations Refugee Agency (UNHCR) is stepping up its efforts in Iraq to deliver winter aid to people displaced by this yearâ€™s conflict including Thursday with the landing in northern Iraqâ€™s Kurdistan region the first in a series of flights carrying supplies aimed at mitigating the impact of the harsh months ahead.

The first of seven planned flights from Pakistan touched down at Erbil International Airport at just before midnight local time on Thursday, carrying 3,600 tent insulation kits, which include polystyrene flooring and fibre insulation for tent walls intended to keep refugees in camps warm. “Time is growing short,” UNHCR Regional Director Amin Awad warned on Friday. “With temperatures now dropping across Iraq, we must get this essential support to the most vulnerable Iraqi displaced immediately.” Latest figures now indicate that around 2 million Iraqis have been displaced since January. More than 60,000 people are now living in eight tented camps, and new camps are being constructed to house more than 300,000 others. Currently, as many as 700,000 people are living in unfinished or abandoned buildings, schools, religious centres, and even in parks. Six more cargo flights are scheduled to arrive before 12 December, bringing a total of 25,000 insulation kits to Iraq from Lahore, where a major producer is located. While UNHCR, Iraq’s Government in Baghdad, the regional government in Kurdistan, and aid partners are working to provide safe and warm shelter to all in need, challenges loom ahead. “The needs vastly outstrip current resources. All of us in the humanitarian community remain deeply concerned that we will not be able to fully support all those in need this winter,”  Awad said. UNHCR needs 15,000 more insulation kits to reach a target of 40,000 families. And the needs go far beyond tent insulation, to plastic sheeting, cooking kits, warm clothing, camp drainage systems, water proofing and stoves for heating. Funding constraints are also a major challenge. UNHCR has received less than half of the more than 110 million dollars it is seeking for winterization.